One of the most captivating aspects of the Victorian age was its tendency to confuse issues which ought not to have any logical connection at all. Among these the concept of the Gentleman loomed like a cloud over the landscape, permeating every backwater of social intercourse, tilting the balance of debate.

The theme of this second part of my cricket tales is overwhelmingly ‘my gentlemen.’ It had nothing to do with class or with a capital ‘g.’ The only social status they had was to be in the same place as I was for a serious cricket match. Many of them are no longer alive yet I feel so fortunate they are still with me in my mind.

My performance for Combined Country in February 1957 led to my selection in the Petersham-Marrickville First Grade Team. Our home ground was Petersham Oval. I love that ground.

It was our school home ground for Fort Street and we won the Sydney High Schools competition in 1949. Our opening bowler at the time was Alan Wyatt who went on to open the bowling for New South Wales. I gained selection in the Combined Sydney High Schools team as an opening batsman. I had not taken up wicket keeping at this stage.

Here is our Petersham Marrickville team in 1957 as revealed by an ancient press clipping. These people are some of my ‘gentlemen’ but as you can see, the newspaper decided to give them capital letters. 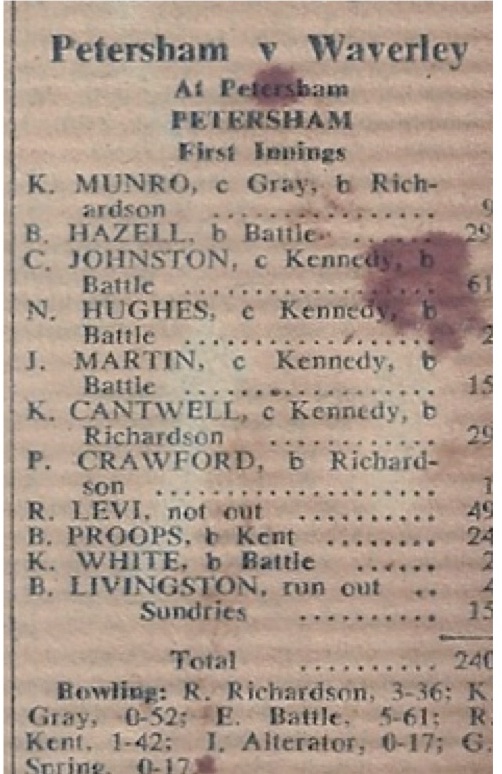 Clive Johnstone was at times captain of New South Wales. Noel Hughes had recently returned from a stint with English cricket. His sons, young at this time, were to grow into a distinguished cricket and football family.

Johnny Martin was yet to be the noted Test player. He was incredibly hard to “read” as a bowler for the wicket keeper that I was. We had an agreement that he would nod for a wrong ’un. Alas his mind and his body were not always in harmony so I would often get the wrong message. Poor batsmen though! He would trick them constantly too. But then I had to stop the ball to prevent four byes.

Johnny Martin was a lovely human being. A man of massive talent with bat and ball. As a first slip player he often stopped byes from a ball I missed. He was a true friend, humble and supportive. I had got to know his two brothers too in earlier days.

Vince was an opening bat for Stockton in the Newcastle competition I later played in. I rode in a taxi, when I was teaching in Maitland, driven by Johnny’s brother Tom. He said to me, “Keep an eye out for that young fellow (brother John). He’ll play for Australia some day.” He was right.

Johnny is also famed for his big hitting on Melbourne Cricket Ground. With ordinary bats too, not the supercharged 20/20 ones of the present.

Kevin Cantwell was a slow medium for whom I stood up to the stumps and got a stumping in one match match against Gordon. He was a brilliant field and a leading baseball player. I remember Brian Taber as the Gordon ‘keeper in that match, before his Test fame had arrived.

Pat Crawford had just returned from bowling for Australia at Lords . He was quick. I had met him in the National Service strangely enough. He represented New Holdsworthy’s troops while I was the wicket keeper-batsman for Old Holdsworthy. Keith Herron, a First Grade wicket-keeper for Drummoyne and a very diminutive person, had to deal with Pat’s bowling on a mat. I remember one of the deliveries almost going for six byes – or more accurately these days six wides.

Pat was kind to me and supportive, a rather overwhelmed country lad that I was. The other three team members were very good bowlers. Bruce Livingstone was the opening bowler for New South Wales, along with Pat Crawford.

Ken White was a skilful off spin bowler. Television came to Australia in 1956. The ABC was televising Grade cricket matches in 1957. In our match at Bankstown Oval, Alan McGilvray and Michael Charlton were busy describing our all-day performances. Ken was bowling to new batsman Grahame Thomas. He moved out to a yorker, missed, the ball hit my ankles and I missed the stumping. Thomas went on to get fifty, play for Australia and have an oval at Bankstown named after him. So as I see it everything happens for the best.

Ron Briggs for Bankstoen had been batting all day before Thomas came in, and finished with 187. Alan McGilvray was very sympathetic for the stressed out keeper with hours in the field who missed that one of so many balls. Had I made that stumping perhaps there would be an oval named after me instead of Grahame. (Only joking,) Just a few mistakes sent me to Second grade and thence back to a lifetime of teaching not cricket.

Here is an ancient and  just surviving record of the Country innings on the first day of that match: February 13, 1957.

My happiest memories are linked with the human qualities of the players, the gentlemen. First, the chance to talk for an hour after the match with Brian Booth, a captain of Australia, was a delight. A man of great status, he was so humble and so easy to talk to. His words were a fine complement to the artistry of his batting I observed on the field. His opening partner Warren Saunders was also a sheer delight to share time with.

Here is the Sydney innings. It clearly shows the cricket powers of those two players in particular.

It was an interesting experience too to be treated by the Cricket Association as representative players. Accommodation in the now extinct Hotel Sydney was very comfortable. Hire car transport to and from the SCG was relaxing for the players. Cricket boots left in the dressing room over night were cleaned with bright whiteness next morning. A small player wage we got to cover costs was quite an honour and a new experience.

Sam Trimble broke a finger facing Gordon Rorke. He was taken away for medical treatment and resumed his innings later. That was the starting moment perhaps of an illustrious career with Queensland and later Australia.

The haloed SCG itself was another joy. That “visitors” dressing room had served many players of distinction. A haloed place to be,

My other Sydney opponents in that match of long ago are still remembered.

Ken Muller I had met in my school days. He was a Fort Street student as I was. Peter Philpott was twelfth man for the 1949 Combined High Schools team I played in. He was a thoughtful bowler who turned the ball quite sharply and deserved more wickets. He was also a stylish batsman. I was destined to play against Grahame Thomas later in the year, as I have discussed elsewhere.

My Second Experience of Sydney Grade

In the 1957/58 Sydney season I played four matches in First Grade and two in Second Grade. I batted only twice in the four First Grade matches for 20 not out against Gordon, and 49 not out against Waverley. I was not called on to bat against Western Suburbs and Bankstown. In Second Grade I scored 71 against Paddington at Rushcutters Bay and 20 against Glebe-South Sydney at North Sydney Oval. So my batting average was rather good.

After the demotion I felt a stronger calling from the profession I loved — teaching. I decided to leave the city, if the Department of Education so decreed, and rejoin the permanent teaching ranks. I was appointed far from the city cricket scene to a one-teacher school at Chichester via Dungog in the Hunter valley.

At Chichester I was unable to get weekend accommodation so I had to stay with my parents at Ferodale, four miles north of Raymond Terrace.

Thus, with the help of Fate, I was able to return to cricket at Stockton in the Newcastle competition. This in many ways was the beginning of another cricket adventure. The next part of my narrative will focus on this.

To end this chapter, these links might interest you:

(My special thanks to the wonderful Marrickville cricket researchers.)

Marrickville Cricket Club, in my time joined with Petersham, has a long and proud history commencing in 1910.

Notes From The Net and My Memory

As you know, I played with Johnny Martin and Pat Crawford. I admired from outside the fence Barnes , Alley and Moroney. Alley became a test umpire in England and in his very first Test with the very first ball he had to give a decision. It was out, caught behind and he was right. Andrews was before my time.

I saw Jack Moroney when I was an admiring kid, hit a six right over the rail arches in a Grade match at my Glebe home ground, Jubilee Oval. He was a solid Test opener but he could be aggressive too. Two ducks in a match were an inaccurate cause of demotion in that seven Test match career. He was a high school maths teacher by profession.

Marrickville CC’s players include Johnny Martin, Pat Crawford, Sid Barnes, Bill Alley, Jack Moroney and Tommy TJ Andrews  It has been home to Australian Captain Bob Simpson and three of Bradman’s ‘Invincibles’ – Ernie Toshack, Bill Brown and Ron Saggers. I remember the grace of Ron Saggers when he played for New South Wales. To clash in time with Test star Don Tallon from Queensland was bad luck for Saggers.

Here is a link to the Marrickville site: